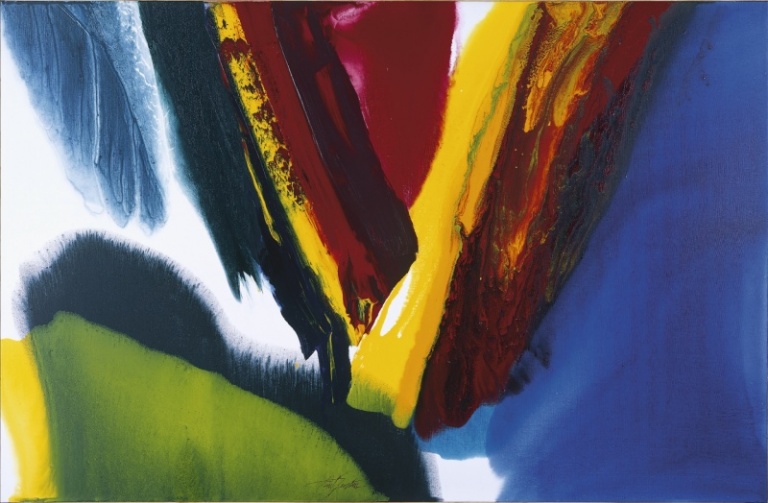 In 1948, painter Paul Jenkins, fresh from the Kansas City Art Institute, arrived in New York City to study at the Art Students League. Abstract Expressionism was at its height, as was the art criticism of Clement Greenberg. Jenkins met Jackson Pollock, Barnett Newman, and Mark Rothko, all greatly influential to the emergence of Jenkins’s own style. In 1953, Jenkins traveled to Europe, and in Paris he met the French art critic Michel Tapié. Tapié championed Art Informel, the new improvisatory manner of abstraction then evolving. From this experience Jenkins derived an appreciation for unemotional gestural painting and a passion for Mediterranean light and color.

Paul Jenkins’s work thus figures among the many examples of Post-Expressionism to emerge during the 1950s. His broad canvases saturated with the new acrylic paints, then widely available for the first time, situate him among Helen Frankenthaler, Morris Louis, and others of the Color Field movement. By the 1960s, Jenkins had even attracted the favorable notice of Clement Greenberg.

Ever since, Jenkins has celebrated opulent color and the pleasure of the optical experience. He first began to title his paintings as “phenomena” in the 1960s, saluting the unexpected results his dynamic engagement with paint and canvas was capable of producing.(1)