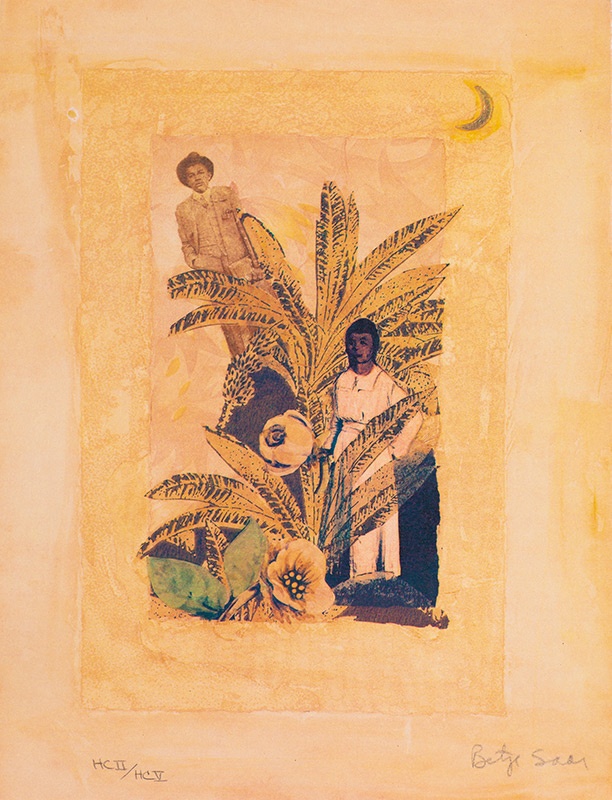 In the portfolio Six Serigraphs: Bookmarks in the Pages of Life, Betye Saar interprets stories by Zora Neale Hurston. Best known for Their Eyes Were Watching God (1937), Hurston was a writer, anthropologist, folklorist, and central figure of the Harlem Renaissance during the 1920s and 1930s. Over the course of her career, she published four novels in addition to more than fifty short stories, essays, and plays. Hurston’s stories Magnolia Flower (1925), Mother Catherine (1934), and Now You Cookin’ with Gas (published as Story in Harlem Slang in 1942) address themes of race, class, and gender.

Each of these titles, in addition to The Bone of Contention (the basis for the play Mule Bone: A Comedy of Negro Life co-written with Langston Hughes in the early 1930s and published posthumously in 1991), High John de Conquer (1943), and The Conscience of the Court (1950) directly correlate to Betye Saar’s serigraphs. In each print, Saar visually represents the characters and key themes of the texts, including racial stereotypes, good versus evil, and personal relationships.

Published in 1925, Hurston’s short story Magnolia Flower recounts a tale of discord between father and daughter over life choices and love. Saar’s print from the portfolio depicts the story’s father and daughter separated by physical space and by nature. The magnolia flowers and palmetto palms engulf the figures and demonstrate the importance of place. Saar uses nature as a metaphor for the cycle of life and progression of time.