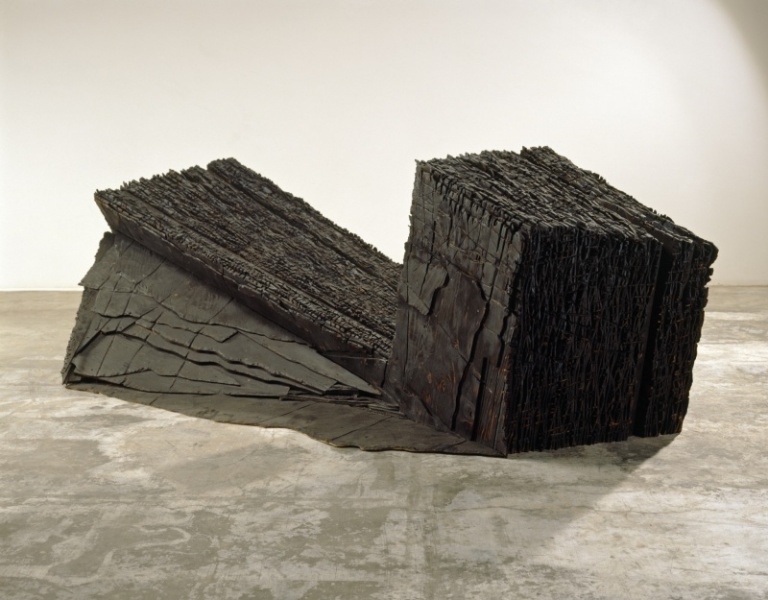 Composed of sheets of layered plywood roughened by scoring, cutting, burning, and staining, Loma Prieta is a massive sculptural object. In creating such a large piece in wood, Dennis Leon addressed the process of making it and underscored the object as the lasting record of his engagement, even struggle, with the material. "Loma Prieta was started in my Oakland studio about two weeks before the big earthquake of October 17, 1989. Since the sculpture was about how some rocks are formed by earthquake action, I respectfully named it after the earthquake’s epicenter.”(1) Loma Prieta speaks of the power of nature and the forces that have shaped and reshaped the California coast for millennia.

Dennis Leon was born and raised in England and educated at Temple University in Philadelphia. In 1972, he moved to California to teach at Oakland’s California College of Arts and Crafts (now California College of the Arts), where he remained for the next twenty years. Informed by his memory of the British countryside and inspired by the dramatic scenery of his new home, he made nature his primary subject. Process and material were secondary to his realization of evocative bronze and wood emulations of the drama of pressure, fusion, and fracture. Leon’s sculpture is at once Modernist and Conceptual, celebrating nature’s complexity.