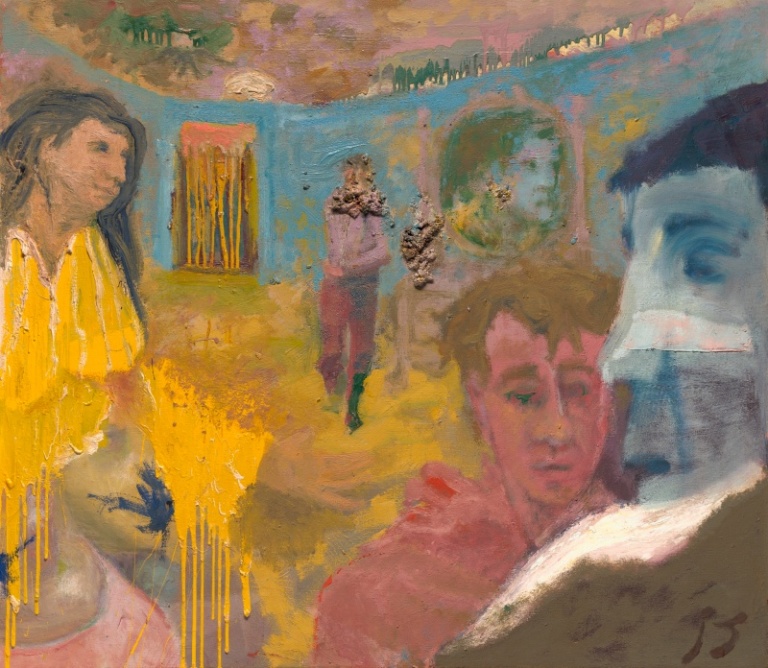 When Norris Embry arrived in San Francisco in 1953, he sought out the artist Burgess Collins (called Jess) and his partner, poet Robert Duncan. Together, the pair had developed a symbiotic interest in literary symbolism and myth and were at the center of Beat Culture, even operating the short-lived but legendary King Ubu Gallery on Fillmore Street.

Jess and Duncan temporarily housed Embry, a figurative painter unimpressed by San Francisco’s non-objective artists. He challenged Jess to paint a narrative filled with figures. Jess responded with Feignting Spell, a painting rare not only for its style, but for the self-portrait Jess included. This was among Jess’s favorite works, never sold, and prominently displayed throughout his life in the home he shared with Duncan.(1)

While its content is symbolic and obscure, most figures are identifiable: Embry with bandage, Jess right behind him, and a female muse, or guiding spirit. Curiously embedded in the background is the visage of Narcissus reflected in an oversized dresser mirror. Jess later “toyed with the idea of carrying out a major painting on the Narcissus myth” although he seems never to have done so.(2) The figure depicted midstride possibly represents Duncan, although his features are obscured by thick impasto.