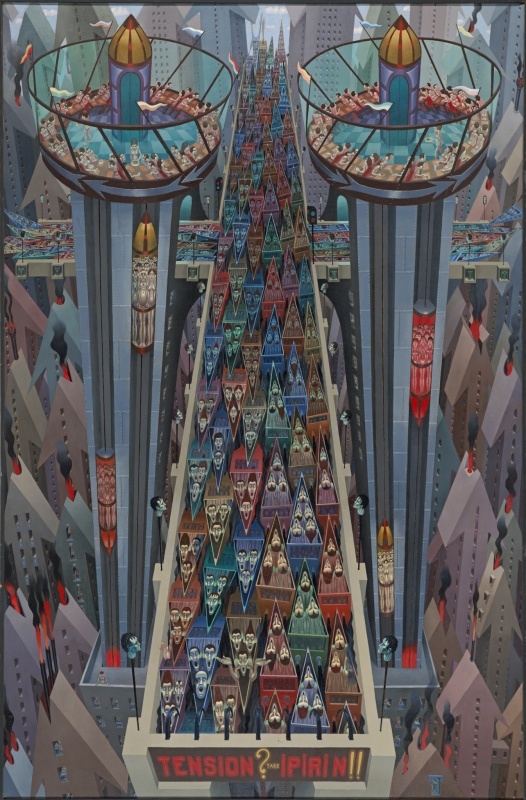 Irving Norman arrived in the United States in 1923 and was overwhelmed by his experience of the American city, first New York, then Los Angeles and San Francisco. The pace of city life made such an impression upon the artist that scenes of urban congestion and the ceaseless rush of people became recurrent themes in his art. Like many immigrants of his generation who left Europe to escape poverty and political turmoil, Norman felt a deep responsibility to fight oppression. In 1938 he joined 2,600 other American volunteers who went to Spain to fight fascism and defend the Republic against the military advances of General Francisco Franco. Norman’s combat experience indelibly imprinted images of death and destruction on his psyche, profoundly altering his outlook on life.

When Norman returned from Spain he used drawing to exorcise depression and the visions of war that haunted him. In 1940, he enrolled at the California School of Fine Arts in San Francisco. By 1946 he was at the New York Art Students League. Norman was attracted to the social realism of the Mexican muralists such as Diego Rivera and traveled to Mexico during this period. In the muralists’ monumental paintings, Norman recognized a means by which he could express his own horror of war while also offering critique of contemporary society.

Norman created dystopian drawings and paintings in which the preservation of individual rights and welfare hangs in constant jeopardy. His production was thus anachronistic to the larger movement toward abstraction that defined painting in the postwar period and probed wounds only just beginning to heal. He worked in relative obscurity hoping that “my work has some relevance to some people, has some effect on them . . . make them more humane.”(1)