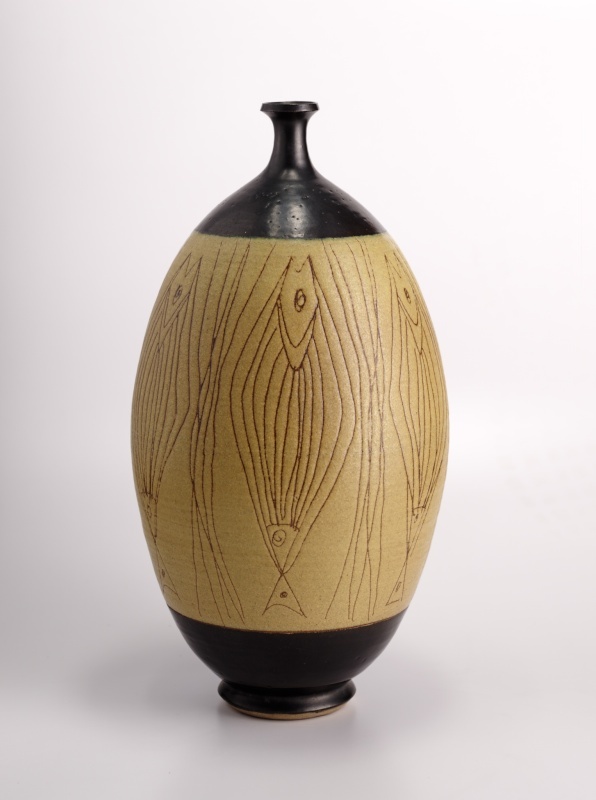 Prieto hewed to these artistic principles from the time he began studying sculpture at the California School of Fine Arts in San Francisco, today the San Francisco Art Institute. He then went on to teach at East Bay institutions, such as the California College of Arts and Crafts (now California College of the Arts), before succeeding F. Carlton Ball as director of the Mills College ceramics department in 1950. Makers at that time largely relied upon juried exhibitions and competitions to show their work. Much of the era’s production featured reductive shapes with graphic decoration. Prieto was greatly admired in the field and a frequent award winner, particularly for his clean, modernist vases such as the example shown here featuring a register of ornamental fish, sparingly incised and much in keeping with the midcentury influence of Picasso on the arts. The scale on which Prieto worked grew ever larger as he aimed to endow greater visual impact to both vessels and purely sculptural forms. The latter reveal Prieto’s attraction to European Modernism and Primitivism, especially that of Joan Miró.

Prieto quickly became a respected art juror and educator who attracted talented students such as Robert Arneson to Mills College. Eunice Prieto, his wife, was a trained ceramist in her own right, educated at Alfred University, the foremost program for such study and where she and Antonio met.