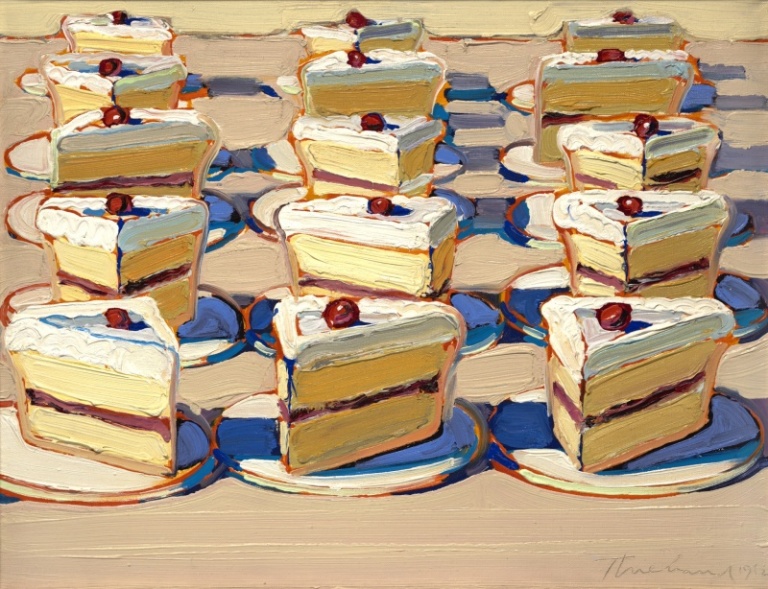 With their thick, luscious impasto, Thiebaud’s paintings are greatly admired for the manner in which his edibles appear fully modeled and tantalizingly delicious.

Like many artists of his generation, Wayne Thiebaud began his career as a commercial artist, including a short stint as a teen at Walt Disney Studios, before formally studying at San Jose State University. He came to Sacramento in the early 1950s for graduate study at (then) Sacramento State College and taught at Sacramento City College for nine years.

In 1960, he joined the faculty of the art department at the University of California, Davis. Thiebaud might have remained a beloved regional figure but for a 1956–57 teaching hiatus during which he worked on Madison Avenue in New York City. There he became acquainted with Elaine and Willem de Kooning, Philip Pearlstein, and other art luminaries. The turning point was a one-man exhibition at Allan Stone Gallery in 1962, which featured Thiebaud’s still lifes. This happened to be the moment the Pop Art movement captured the nation’s attention, and Thiebaud’s subjects were confectioners’ delights.

In a May 1962 Time magazine summation of Pop Art’s stars, Thiebaud’s Allan Stone Gallery show inspired the moniker, The Slice-of-Cake School. With a bright palette, consumerist imagery, and graphic presentation, Thiebaud’s paintings were of the moment, but differed from Warhol, Lichtenstein, and Rosenquist. Those artists emphasized the methods and appearance of mechanical reproduction, but Thiebaud was a painterly practitioner.

Depicting his subjects against clean white backgrounds, he outlined his forms with bands of rainbow color, creating an optical halation that further activated the surface of his work. He set the confections against vibrant blue shadows, and the cool contrast this provided to the artificial colors of the sugary treats became a signature element of Thiebaud’s style. With their thick, luscious impasto, Thiebaud’s paintings are greatly admired for the manner in which his edibles appear fully modeled and tantalizingly delicious.