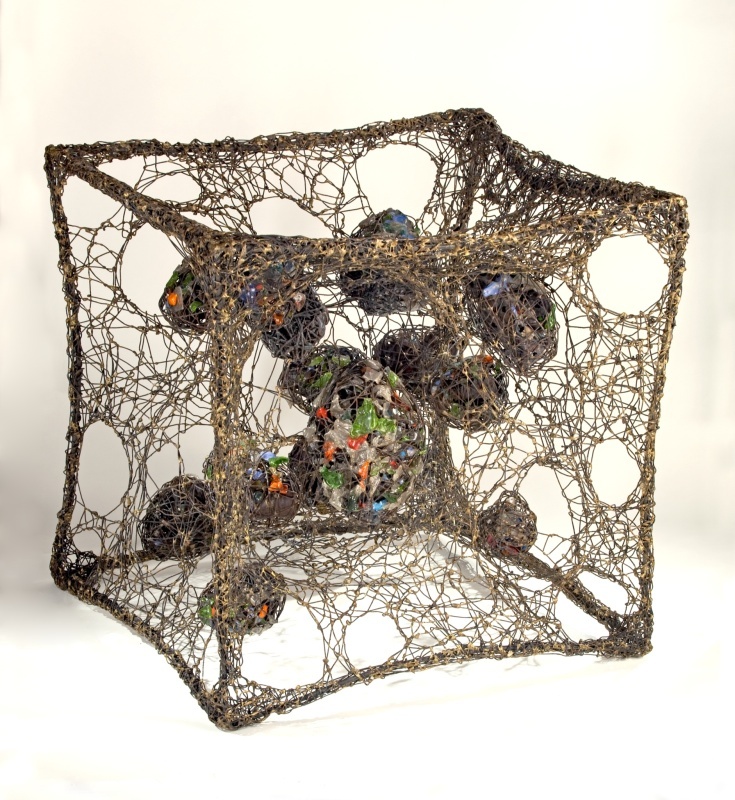 Claire Falkenstein began her career at the center of San Francisco’s art scene. She was a painter and sculptor engaged with Pacific Coast Surrealism and a respected instructor at the California School of Fine Arts from 1947–49.

She moved to Paris in 1950 and continued her sculpture there on a smaller scale by making art jewelry. She mastered new techniques and forms, and increasingly used wire. By 1953, she had taken wire to unprecedented levels, constructing larger, complex nettings of filament, soldered wherever necessary. Her forms were open work pods or, in this instance, cubes. Falkenstein offered a radical solution to sculpture and space by manipulating material in such an original manner.

Her next major breakthrough came with the embedding of glass pieces into her lattices. At first these were wedged into place, wrapped by the wire, and held by pressure alone. In 1954, she learned kiln and torch techniques that allowed her to address the different melting points of her materials. Fragments of colored glass could be slumped amid the filaments, often fully encasing them. Further defining the fabric of space, glass also added a new sensuousness to the work.

With her nontraditional materials, organic forms, and innovative processes, Falkenstein’s aesthetic fit nicely with the Art Informel, an improvisational movement favored by the art critic Michel Tapié in his book Un Art Autre (1952). Tapié’s support cemented Falkenstein’s reputation abroad. In 1962, she left Europe to continue her career in Los Angeles, and by the 1970s, she had executed numerous commissions for monumental works.