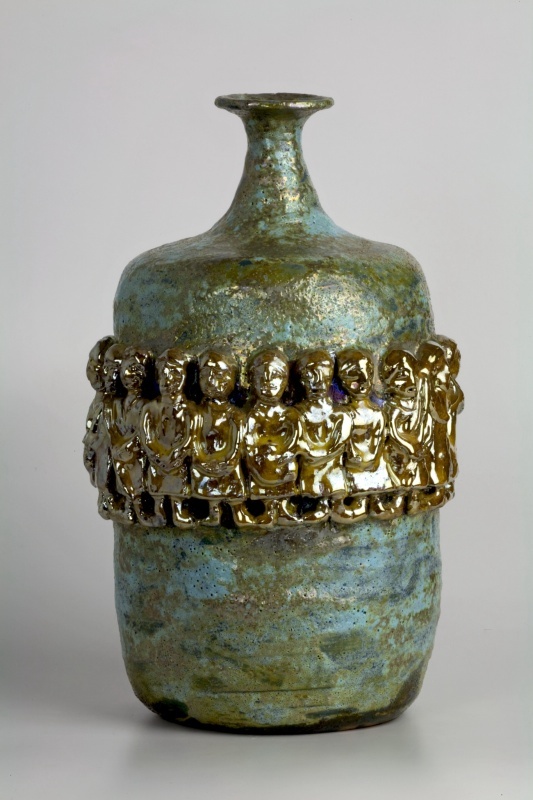 A painter, draftsman, and author, Beatrice Wood is best known for her figurative ceramic sculptures and for vessels such as this luster-glazed bottle ringed with intertwined figures. Famously called the "Mama of Dada," she considered herself an accidental artist, encouraged in her pursuit of an unconventional life by her close association with artists of the Dada movement, especially Marcel Duchamp.

Wood, who lived in New York, met Duchamp because of the 1913 Armory Show and, in her 1985 The Autobiography of Beatrice Wood: I Shock Myself, claims authorship of the famous quote written in defense of Duchamp’s infamous 1917 readymade sculpture, the urinal Fountain: “The only works of art America has given are her plumbing and her bridges.”

In 1935, Wood left New York for Los Angeles and opened her first ceramic studio. The quirky sculptures she sold from her storefront launched her lifelong use of male and female figures to dramatize the capricious nature of relationships, especially love and marriage. By the 1940s, Wood was in complete control of her craft, having studied with master ceramists such as Glen Lukens and Gertrud and Otto Natzler. After applying her charming figures to thrown vessels such as this one, she decorated her wares with iridescent glazes and metallic lusters.

Ultimately drawn to the idyllic Ojai Valley, Wood left Los Angeles, established a new studio, and taught at The Happy Valley School. Her luster glazes, a tricky matter to perfect, earned her international acclaim. In 1984, Wood was declared a California Living Treasure. She worked in her Ojai studio until age 105.