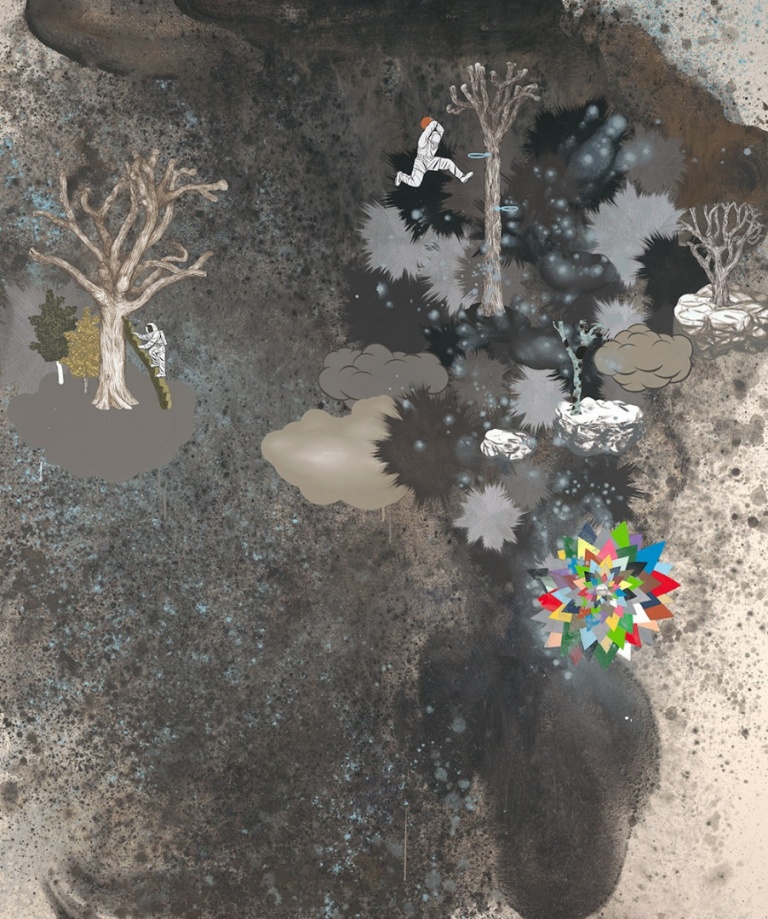 David Huffman’s creation of characters, such as his orbiting Traumanaut All-Stars, springs from a childhood passion for action figures and anime. Their presence also carries a more personal meaning, he says, “This is how I felt growing up in America as a person of color, like an unidentified flying object.”(1) Unanchored in an ambiguous space, Huffman’s stylized figures actively express the artist’s own sense of alienation.

In Huffman’s most recent work, the Traumanauts continue to be the focus and increasingly address the legacy of negative stereotypes in an ever more pointed manner. With the ongoing presence of basketballs and hoops, Huffman acknowledges Romare Bearden, who in 1968 stated that people of color “. . . should have the same interest in artists that they might have in Negro basketball and baseball players — or now in politics and other things. This has to be pushed the same way.”(2)

Here, the Traumanauts fly like Michael Jordan and climb to low hanging branches. The title of the painting was inspired by the Jimi Hendrix song, Belly Button Window, which revisits an unhappy childhood beginning in the womb. Huffman is drawn by the imagery in the lyrics “Well, I’m looking out my belly button window, / And I see a whole lot of frowns, / And I’m wondering if they don’t want me around.” The brightly colored chrysanthemum star, a motif left over from Huffman’s days as a ceramist, bursts forth like a new life, representing beautiful possibilities, uniqueness, unwritten stories, and challenges ahead.